What a busy year we have had so far…We are currently in the last stages of mixing “Live To Fight Another Day” – we had hoped to have had the album out by Xmas, but we are now looking at an early 2020 release date instead. We’re very excited with how these tunes have shaped up!

We have written most of the following album (“Courage Of Conviction”) which we have also begun tracking…and that too has been great fun – as you can see in the pics below, we thought we would provide proof that we weren’t just sitting around making this stuff up :p

The line-up for the “Courage Of Conviction” album is looking pretty hot, we are teaming up with some talent that we haven’t as yet had the opportunity to work with before so that will be something interesting for us to experience, As you can see by the track listings Chris and I are stepping up in the singing department ourselves, but we also have some excellent friends lending their talents to this end as well, some are familiar names to The Feckers but there are also some new singers and musos that we are welcoming to the fold. 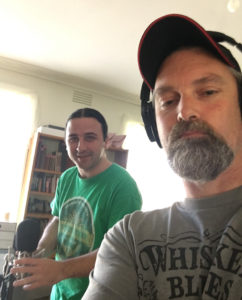 I’ve had the great pleasure of this year catching up with both Chris Szkup and Dennis Leeflang in person, It was great fun finally meeting Dennis for the first time – I was on my way to Nova Scotia to visit family and he kindly made way in his schedule to come and hang out and show me around a bit of LA. We had hoped to have all 3 of us gotten together early next year, but I have a trip to the UK/Ireland and Canada planned mid year that has had to have taken precedence for a number of reasons both personal and professional. However we do hope that the 3 of us will be able to get together sometime in the not so distant future…Chris and Dennis may still get together though!

Chris and Dennis have also been busy completing tracks for the TCSO EP that should be out pretty soon, the bits and pieces that I have heard sound pretty good 🙂

2020 will be the 10th anniversary of when Chris and I first met in person, previous to that we had been online buddies/collaborators for 12 years. It’s great that the 2 albums currently in the works will feature songs that we wrote together in person in 2010, as well as some songs we wrote together in 2018 and 2019…and hopefully some more when we get together next year – we’re actually getting together next month on this side of the Tasman for a change, we may have a wee writing session as well as the unplugged performance that has been planned…any opportunity to sing “Slackers & Wankers” together is always welcomed.

We are also writing for a couple of EP projects that we will likely release between albums. 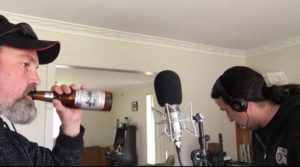 There could also be coming soon the release of a cover tune that Chris and I have sung on together which was loads of fun to work on, we had considered an EP of these tunes with a different line-up but the other guys have been terribly busy churning out albums of their own in the meantime and seem to have forgotten about that plan LOL

I’m currently in talks with a couple of young film makers about getting together to film a concept video (or two) for release in 2020 to accompany the “Live To Fight Another Day” album, I should have some news to this end by the time I check in again.